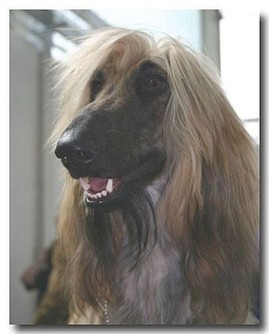 Ready 4 Take Off of Meadow Valley

Thirty years ago, in 1982, the year we've got married, our first Afghan Hound, Belino of Karma Tschangri joined us and made us very happy with his kingly  presence. One year later we bought his halfbrother Calimero of Karma Tschangri and this was the point where everyone seemed to be satisfied. But .....

...when we were visiting the boys' breeder in summer just to say hi, show him how proud we were of our beautiful dogs and take a look at the 8 weeks old E-litter, we saw a wonderful sister of Calimero (out of the repeat breeding) who was returned to her breeder but unfortunately couldn't stay there since she would not get along with her mum.

Dalarna, already two years old, immediately caught my eyes and heart and I bet you already guess where she found her new home a few weeks later :-). Since her breeder wanted her to be shown, this is where we got involved in dog shows and, after Dalarna became a champion and earned some additional titles, we decided to start breeding Afghan Hounds.

Sadly the breeder of our dogs died some months after we've bought Dalarna, and so Eirene, the bitch he kept from his E-litter was looking for a new home .....

Since our boys were already used to a girl, we  thought they might be enjoying another one and so Eirene joined us at the age of nine months. Now you already know how we got started. If you're interested about the progress of our breeding program and our further Afghan Hounds we would like to invite you to take a tour on our website.