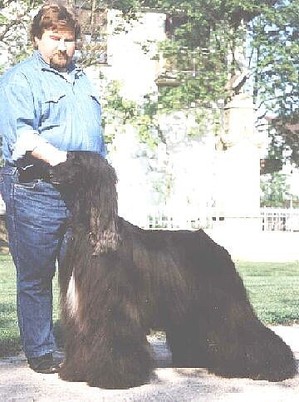 Many years ago, while checking out another dog on a video tape
for a friend who asked for my opinion about this other dog, I fell in love with Cassidy the first moment I saw him on this tape, not knowing who he was and  that he ended up beeing the the winner of this show. It was the video  tape of 1994 AHCA National specialty .....

"Cassidy" earned many championships and titles, sired some very nice litters, but what really counts for us, he was a wonderful compagnon, he was
our love and our friend.

He suffered two stomach torsions at the age of 11 and 12 years and thanks to the great help of our vet Dr. Heike Richter-Simon and best possible care after surgery he recovered and continued to enjoy life. When he suffered his 3rd torsion at age 13 we sadly had to let him go. He died very peacefully in my arms ....

Toni was the one who showed him to ALL his championships and titles.

Cassidy  wouldn't show for anyone else who only would be interested in "success". He needed to feel to be dearly loved and respected and there were exactly three people in his live who did really love him, and whom HE showed his love -, his breeder Laura Murphy, Toni and me.