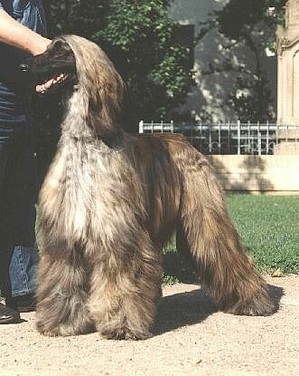 "Schoko" was my once in a life time girl. I knew that it was her I would like to keep from this litter right after she was born, still wet, but looking just unbelievable ..... To me she just had it all, and so no one wonder that she started her carrer winning her first CACIB/CAC at 16 months of age, first time shown in open class.
She also finished several championships (International, two German championships, Austrian) and country winner titles and became the winner of the German DWZRV National Specialty in Köln at only 19 months of age, winning the open class and beating several specials.

She became the mother of our N-litter which was sired by "Chevy's" litter brother "Trouble",  Ch. Gazon Do What You Say. Thank you to our friend Mr. David Osuna, Trouble's owner, for allowing us to import "Trouble" for several months. And thank you to Heidi Moser for taking best care of him while living with her during his stay in Europe.

"Schoko's" second litter was sired by Ch. One More Night of Meadow Valley.